Over the past few weeks we have been preparing for Easter. In order to prepare we have been following the 3 main practices of Lent which include fasting, alms giving and prayer. We have each made a really special effort to be good Ambassadors for Christ this Lenten season by following these practices. As part of the practice of fasting some of us have given up things like sweets or crisps, some of us have tried to give up bad habits like complaining. For alms giving many of us have taken on something that allows us to reach out to others with love and care. For example we have tried to include others, reach out and talk to those in class or at play who might feel lonely. We have each prayed together in school in the mornings, at break and lunch and at home time. Many of us have also tried to pray privately more often. As we approach Easter we have been learning about the last week of Jesus' life. We have learned about The Last Supper followed by Jesus' subsequent arrest, crucifixion, death and resurrection. In groups we completed storyboards based on the Gospel of Mark in order to examine carefully the final week of Jesus' life.

We have started preparing for Advent in Saint Elizabeth. We made our own symbol to help us 'wait' for the birth of Jesus. It looks like a traditional Christmas symbol but there's a twist...

Can you guess what traditional symbol we have based it on?

We have wrapped our special item in our own wrapping paper that we have designed. On each bit of the wrapping, we have drawn and labelled a Jesus-like quote that we are going to live by that day. We will open a sheet each day until our last day of term and hopefully by that point we will be 'READY' to find out what is inside and what we have waited for!

We have been looking at the Gospel of Mark this Advent as it is Year B. Our knowledge of Parables has increased and we have found out the meaning and symbolism of 2 Parables this term, The Parable of the Sower and the Parable of the Mustard Seed. During our study of Mark, we thought about Jesus' journey and used a map to plot out the different places he travelled to - we used our Bibles to give evidence using quotes. We have also studied a new structure of prayer - Lectio Divina - and thought about Paul's Letter to the Corinthians. Lectio Divina showed us how to Lectio (read), Meditatio (meditate), Oratio (pray) and Contemplatio (think).

During this topic, we learnt all about the Sikh faith. We found out about their place of worship - the Gurdwara which means 'Door to the Guru'. Their holy book is called the Guru Granth Sahib and it contains quotes that Sikh's follow and live their lives by - a little bit like Catholics following the ten commandments! We used these quotes to respond to 'Agony Aunt' problems that had been sent to us! 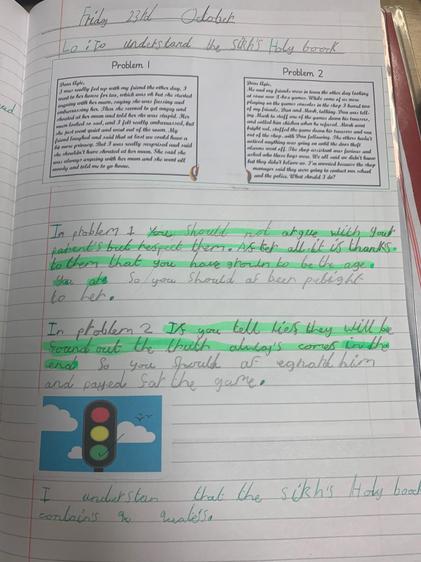 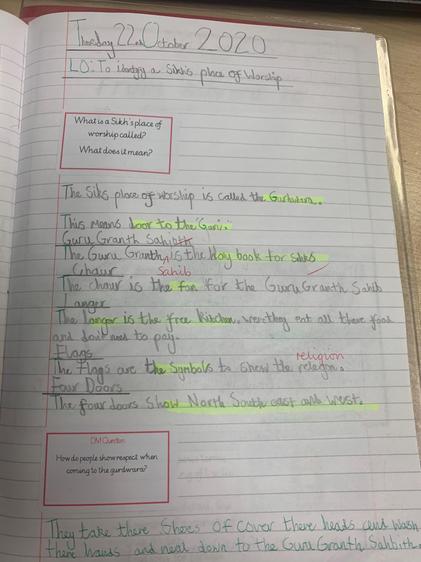 This is our first topic this year and we have learnt all about our class Saint - Saint Elizabeth of Hungary!

We researched her life and found out that her feast day is on November 17th. She helped build a hospital and devoted herself to caring for the sick. Elizabeth wore herself out with her good works, and in 1231, at the age of only 23, she died. One of the miracles associated with St. Elizabeth of Hungary is the "miracle of the roses." As the story is told, Elizabeth was taking bread to the poor when she met her husband, who was out hunting, in the forest. Members of his hunting party suspected that Elizabeth was stealing, but, when she was asked to open her cloak to reveal what she had concealed, a miracle occurred. When she revealed what she was hiding, the bread had been transformed into roses. We created a door display for our classroom! 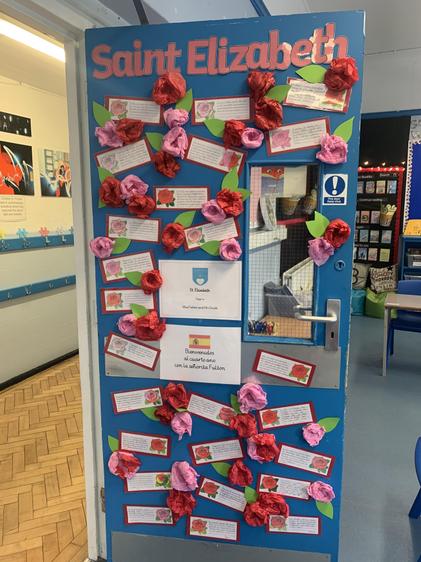 We have been learning about a metaphor for the Church.

'The Church is the Body of Christ'

A human body has lots of different organs, working together to keep the body alive. This is like the Church. There are lots of people within the Church that have a different job to do and we also have our part to play. We each got into a box and once we put all the pictures together, it made the shape of the Cross! 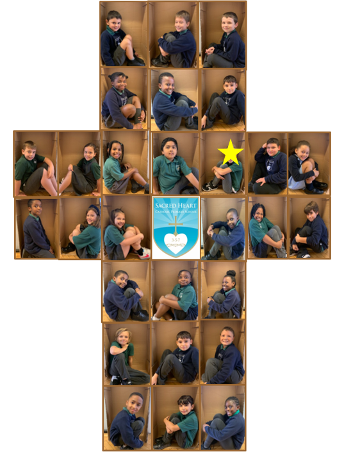 We have also identified the different things that can be found in a Church and explained what they are for. Then, we created our own plan of what we would like in our church, including all the items we already knew. Some of us thought it would be nice to have a memorial area for those who we loved and who have passed away. We could take time to remember them and pray for them when we go to Church.

During this topic, we played Sacrament Charades!

Learning about the seven Sacraments; Baptism, Confirmation, Anointing of the Sick, Eucharist, Matrimony, Holy Orders and Reconciliation. We had to guess which Sacrament each group was acting out using words, actions or symbols!

Can you guess which Sacraments go with each picture?